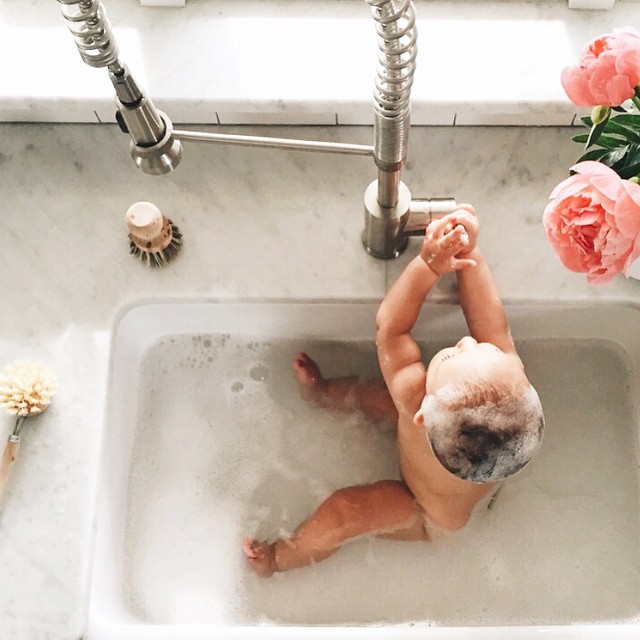 Cute and literal way of a ‘baby shower’

We all know that coming up with cute and eccentric ideas for your baby shower can be tricky and time consuming, so we thought we’d share some tips and innovative ideas based on some celebrity showers!

And on Sunday, 2 June 2013 tables were set, final flower arrangements were adjusted and the red carpet was rolled out at the party which took place in Beverly Hills multi-million dollar home of Shelli Azoff.

More than 50 guests sat amongst tens of thousands of dollars of flowers in a series of private garden marquees erected especially for the occasion.

With the shower themed in the colour pink, to coincide with the sex of the baby, which was revealed on the family’s reality show on Sunday.

The reality star was spotted being driven to the Beverly Hills property by sister Khloe and then mingling with guests once the party kicked off.

Kim, who wore a flowing white gown, kept her head down and had a small smile on her face as Khloe sat behind the wheel of her white Range Rover.

A fun DIY project encompassed this quirky baby shower – did someone say ‘decorating ONESIES’?! Basically, you can purchase some fabric markers and some light coloured onesies and your guests can write some cute and funny messages on them! Your baby will have a whole heap of original outfits and they also make great keepsakes!

We all know how delicious cupcakes and cookies can be, but aren’t they that much sweeter with baby-faces? Jennifer incorporated some sweet-tooth foods with animated baby expressions – it is a perfect fit for the shower and it is also a fun baking project for the mum-to-be!

Although this idea may be on the pricey side for some people, but you really do get your money’s worth. Hiring a photo booth would be great fun for the guests as they could dress up with baby-related props. If however it is too pricey, you could set up a separate area (just have your camera on a tripod) with some DIY baby props – check out Pinterest for some fun ideas!

BebeGroup suggests another fun idea – guests can use a hashtag when uploading any photos on social media of the baby shower, that way the parents can have an archive of memorable pictures! Try something like #baby(name) or anything else that seems relevant!